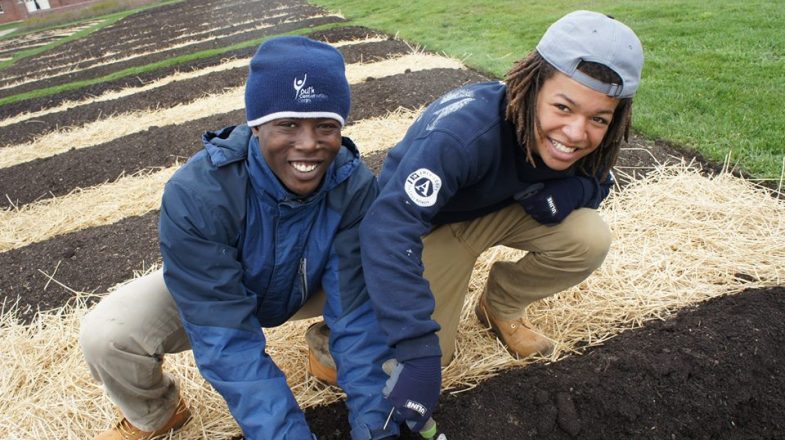 Thanks to the persistence of social innovators across the country, every day we see strategies that are working and delivering results in a rapidly changing world. This ongoing blog series will highlight the voices our more than 70 social innovators that make up the America Forward Coalition and their solutions to our country’s most pressing social problems, as well as examples of how this powerful work can be transformed into national change. Today we will hear from Mary Ellen Sprenkel, Chief Executive Officer of The Corps Network, about the importance of leveraging national service programs to develop cost-effective solutions to some of our nation’s biggest challenges.

Upon his inauguration in 1933, President Franklin D. Roosevelt faced a discouraged country with an unemployment rate of more than 25 percent. To bring relief, one of his first actions in office was to create the Civilian Conservation Corps (CCC): a federal program that, during its nine years of operation, engaged three million young men in planting billions of trees and improving hundreds of parks and forests. For their service, CCC members received housing, education and a dollar-a-day stipend. The CCC was the most popular New Deal program; America benefited from improved public lands and a more engaged citizenship.

Our next president will not need to address national despair on the level experienced during the Great Depression, but he or she will certainly face major challenges. America’s issues range from the inadequate preparedness of our communities for climate change; to tension around race, religion and policing; to the fact that 5.5 million youth are neither in school nor working. National service cannot solve all of these problems, but the next president should know that national service programs, like Corps, can and should be part of comprehensive solutions to these pressing challenges.

The CCC was disbanded at the onset of the WWII, but its model lives on. The Corps Network, the National Association of Service and Conservation Corps, represents 135 nonprofit and state-run Corps across the country. Every year these programs collectively engage nearly 25,000 diverse youth and recent veterans in service projects and opportunities – and we hope the next President will increase the number of available service positions. In Strengthening America Together, our newly released briefing book for the 2016 Presidential campaigns, we outline the impact Corps have in American communities and steps the next administration can take to increase Corps capacity.

Many Corps partner with resource management agencies, like the National Park Service, which currently faces a $12 billion maintenance backlog. Corpsmembers build and maintain trails, remove invasive species, restore waterways, fight forest fires and protect vulnerable plant and animal populations. Corps can do all of this at a fraction of the cost of other means – the National Park Service found they can save an average of 65 percent on projects by partnering with Corps. And the Park Service does not need to sacrifice on quality; a study showed that virtually all (99.6 percent) federal partners would work with Corps again.

Perhaps what’s more important than the impact Corps have on communities and public lands is the way they affect the young people who serve. Corps train young adults for positions in growing sectors like resource and infrastructure management, energy and environmental remediation. Corps help their participants earn professional certifications and gain work experience through service projects. Intensive service also affords young people the chance to develop soft skills – like the ability to communicate and resolve conflicts – that are essential for successful employment. Additionally, Corps assist returning veterans by helping them translate skills learned in the military into civilian careers.

For many young people, service in a Corps is a second chance. Some programs offer Corps members the opportunity to earn their high school diploma or GED. Some Corps operate programs specifically for former offenders who would otherwise have a hard time finding meaningful work and training. Young people who are not in school or working cost taxpayers $93 billion annually in lost revenue and increased social services. In contrast, studies show that every dollar invested in national service programs, like Corps, returns nearly four dollars in benefits to society. Another study found that people without a high school diploma who join a service program are 51 percent more likely to find a job after being out of work than those who do not serve. The next president needs to know these numbers.

Unfortunately, there are currently not enough service positions in Corps programs to meet the demand. In recent years, AmeriCorps – the national service agency that funds many Corps member positions – had to reject some 86 percent of applicants. The Corps Network is fortunate to have strong partners, like America Forward, that recognize the need to advocate for the expansion of national service opportunities so that any American who feels compelled to serve won’t be turned away. Under the new administration, we will continue working with our partners to promote legislation like the bipartisan-supported 21st Century Conservation Service Corps Act, which aims to grow the number of service positions on public lands to 100,000.

As retired General Stanley McChrystal wrote in a recent op-ed for The Atlantic, “A year of service has the power to bring young people together from different races, ethnicities, incomes, faiths, and political backgrounds to work on pressing problems facing U.S. society today. In the process, they can build empathy by getting to know each other around something positive—the shared work of participating in a democracy.” This is something the next president needs to hear: expanded national service can help solve many of America’s current issues.

Read more about how social innovators in the America Forward Coalition, like The Corps Network, are solving America’s biggest problems in communities across the country every day in our briefing book, Moving America Forward: Innovators Lead the Way to Unlocking America’s Potential, and join the conversation. Follow @TheCorpsNetwork and @America_Forward, and tell us how service opportunities have impacted your life and community using #AFPresidential16.